Reminder, we are hosting a BCJP Mead Exam in Austin on Saturday, July 25th. We still have a few seats available for the exam. In addition, we are offering a Mead Exam Prep Class starting THIS Wednesday, July 1st, at 7:00 PM at Meridian Hive Meadery. There will be a total of four classes on subsequent Wednesdays leading up to the exam. Eric Lowe, of Meridian Hive Meadery, will graciously be teaching the classes and administering the exam. Any costs incurred for the classes will be assessed on a class-by-class basis and be split between the attendees.

If you wish to be added to the list of class participants and/or examinees, please email the exam organizer.

Cheers!
Neil
Posted by BJCP Austin at 12:00 AM No comments: 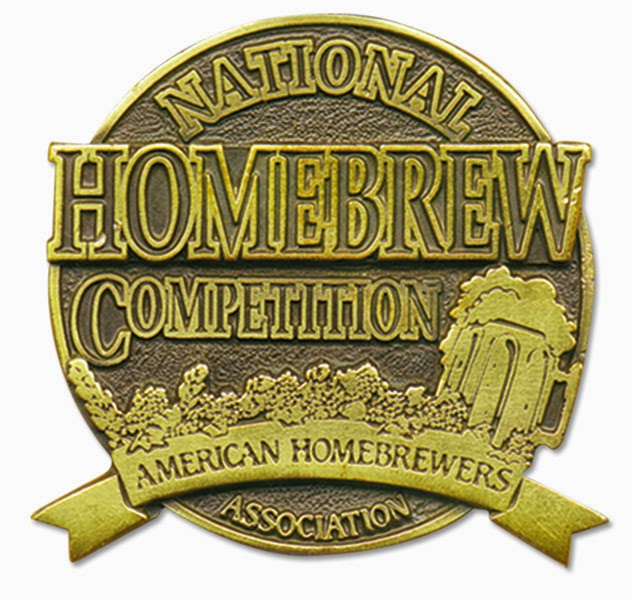 Once again this year Austin, Texas will be one of twelve regions participating in the AHA National Homebrew Competition 1st Round Judging. The entry shipping window is March 2nd - 11th. Unlike last year, we will be doing sorting numerous times as entries come in and will do it at Austin Homebrew. As it stands, judging will take place Friday evening, March 13th, all day Saturday, March 14th and Sunday afternoon, March 15th. I'm hoping we can do as well or even better than last year and knock it out during this timeframe. I know it is the start of SXSW here in Austin and overlaps with the Film/Interactive portion. My sincere apologies for that but this year, this is the best window taking into account all other constraints during the busy March and early April period.

We evaluated three potential sites for hosting the judging this year and have chosen Independence Brewing as our host. My personal and sincere thanks to Amy Cartwright, Jeff Young, and Eric Lowe for their willingness to host us. Every site had pros and cons but at least for this year we feel we have chosen the best location and I think it will be a great experience. I have asked Ann Kapusinski from the Texas Carboys Homebrew Club (Cedar Park) to participate as our Head Steward. I've asked Ann to coordinate and instruct all Steward volunteers as well as manage the "cellar" during the judging dates. Stuart West will again be my partner-in-crime. Additionally, this year we will follow the AHA requested BJCP Queued Judging Guidelines so Judge assignments and organization may differ somewhat from last year. More to come as the time gets closer. 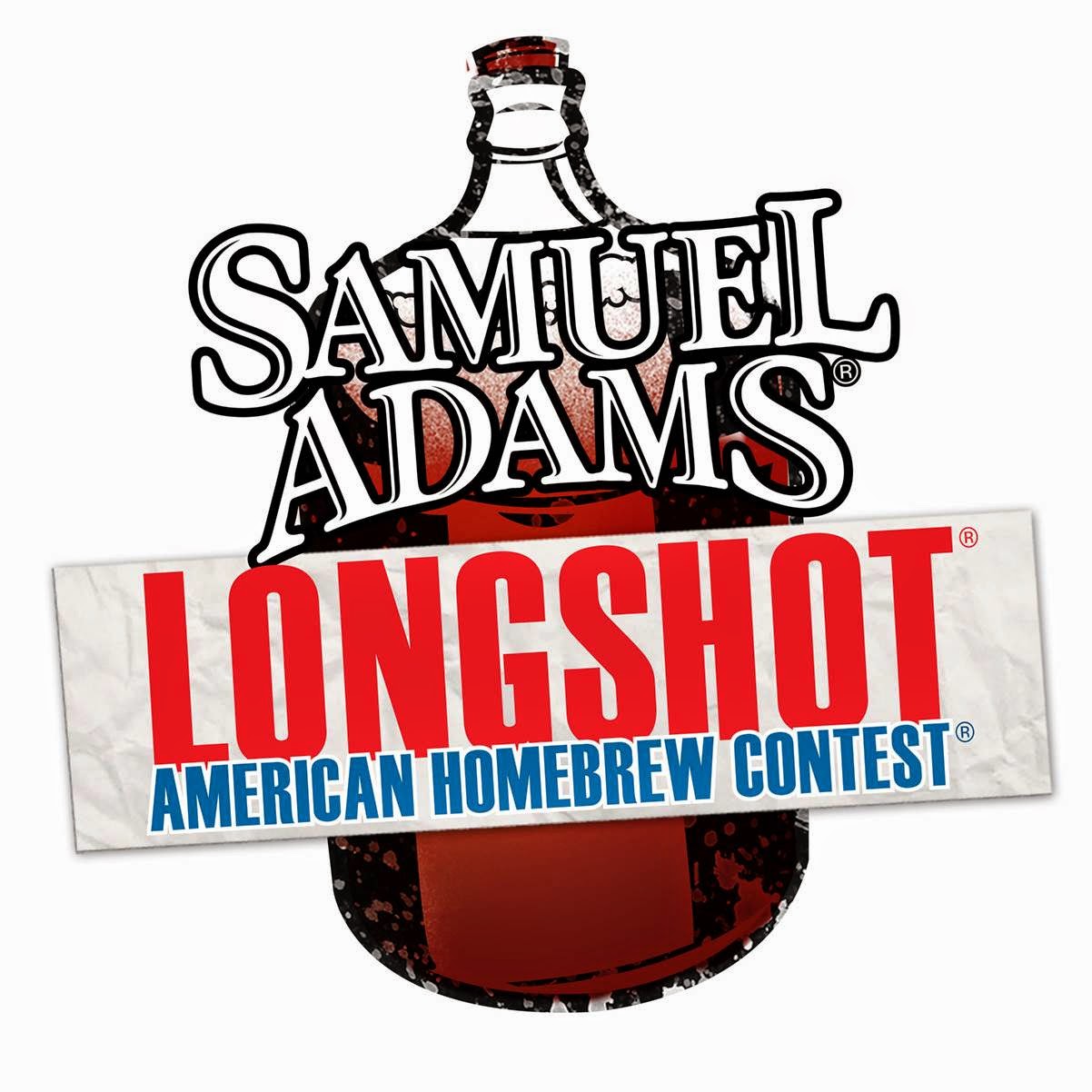 This is cool! Corey and Angela Martin have coordinated bringing the Samuel Adams LongShot Homebrew Competition to Austin! Corey asked if I would be the Site Coordinator for this judging, and how could I refuse? For this year's competition, Austin will serve as one of four pre-screening regions. Judging will take place at an as-yet named Austin hotel during one Saturday in late May or early June (definitely not conflicting with NHC in San Diego). Samuel Adams will pay for the overnight stay of all judges so please consider this great opportunity, it should be great fun. Once I know the details of date and location I will publish them. We will be looking primarily for BJCP judges of any rank but will gladly accept experienced homebrewers that are non-BJCP as well.


Please stay tuned. 2015 is going to be a great year for homebrewing in Austin, Texas!

Yours Aye!
Neil
Posted by BJCP Austin at 11:25 PM No comments: 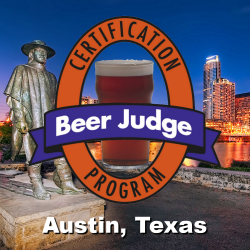 The blog has been updated to add a BJCP Resources page with links to regularly accessed BJCP documents. The docs are PDF copies of ones kept on the BJCP Website but accessible through the magic of Google Docs (no account needed). Further useful resources will be added in the coming weeks. If there's anything you'd like to see in particular, please drop a line to BJCP-Austin.

Yours Aye! Neil
Posted by BJCP Austin at 11:10 PM No comments:

Thanks again to everyone who volunteered to make the 2014 NHC Austin 1st Round Judging such a success! You are the reason this was possible. A special thanks to our out-of-Austin volunteers! I, for one, highly value and admire your commitment. Thanks so much for coming and for all your great contributions!

I've had a number of queries about posting of results. The results will posted by the AHA on their website as soon as they have validated the scores from all the regions. Please note, you will NOT find results posted here, only on the AHA website.

If you entered beers in our region, I am furiously bust trying to get the summary report submitted to the AHA, claiming points for BJCP Judges and Stewards, and packaging up Scoresheets to be mailed to all entrants. I appreciate your patience... I hope to have everything mailed out this week.

Yours Aye!
Neil
Posted by BJCP Austin at 11:28 PM No comments: Out of bed at 7:30 A.M., final prep before hitting the road, brief stop at Starbucks to fuel up and then met (George) Stuart West, my partner in crime, at the judging site. After a bit of a slow start with time taken up assembling boxes for organizing the flights and a last minute run to Office Depot for some overlooked supplies, volunteers started to arrive, Pam Bradley being the first. Rogness owner and host, Forrest Rogness, was kind enough to come and help us attempt to sort out the Wi-Fi situation, but instead it was Stuart's mobile to the rescue. Soon after Ed Kuhn and Edward Peters also appeared. After taking some time trying various schemes, we finally settled in on a flow that worked. Entries had to be hauled out of the cold room, unboxed, unpackaged, and then lined up for entry into the brewing competition software used for the competition. Once entries had been validated for payment, separate judging numbers were applied in order to facilitate organizing the beers into flights at or closer to judging weekend. 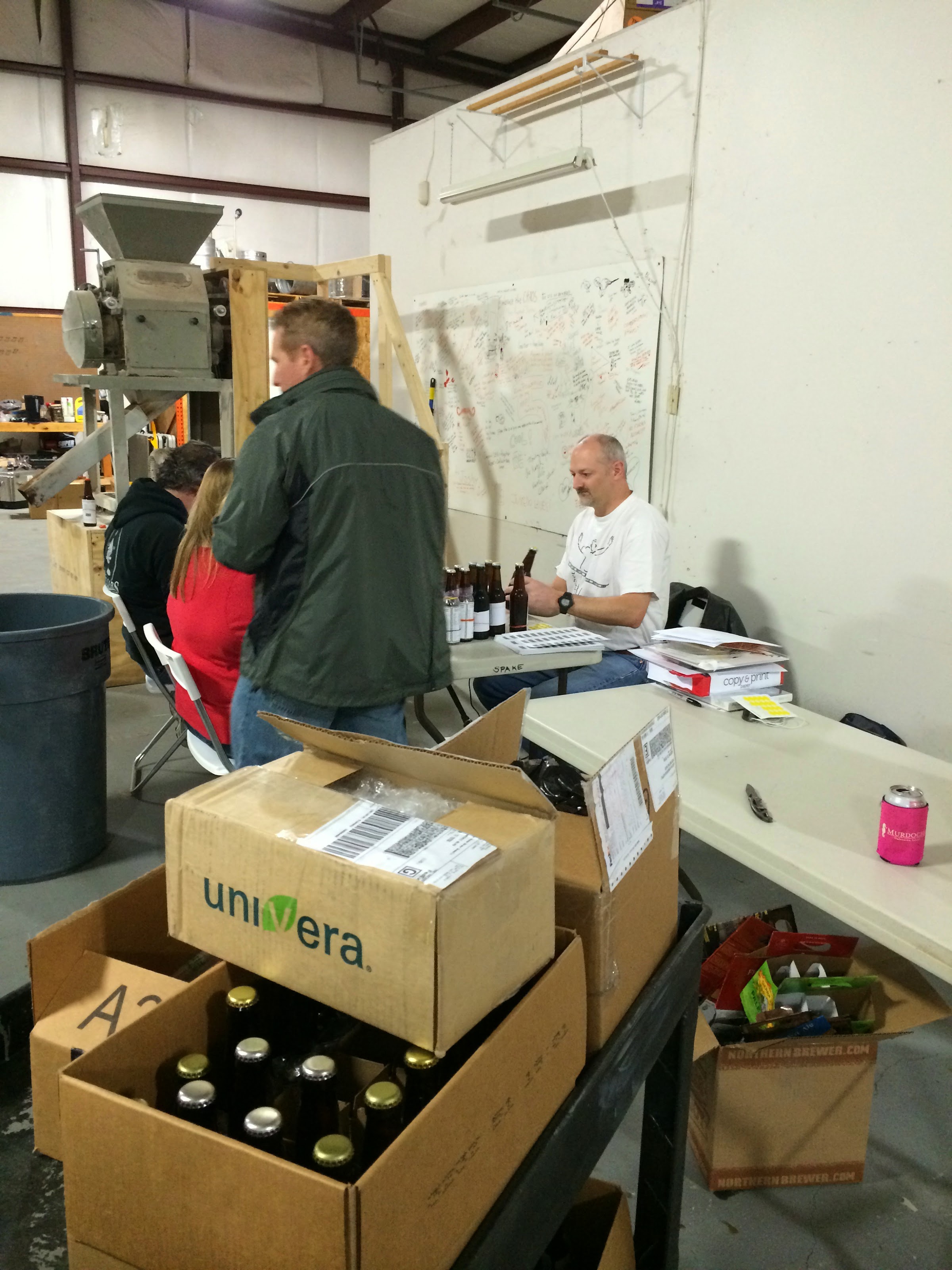 The five of us labored on - and I mean labored - each rotating through the different jobs of unpacking, judging number labeling, data entry, and running the entries to their respective category boxes. Let me tell you it was exhausting work with so few volunteers. Early into the afternoon, I received a text message from Dan Dewberry, he and Joelle and Jonathan Luers on their way back to Austin from Bluebonnet in Dallas. Did I need more help? Of course! Later in the afternoon, the three of them arrived, and a good thing they did. Fatigue approaching, food was in order and pizza was readily ordered. After this short respite, it was back to work. And the unpacking, labeling, data entry, and running kept on going, and going, and going... 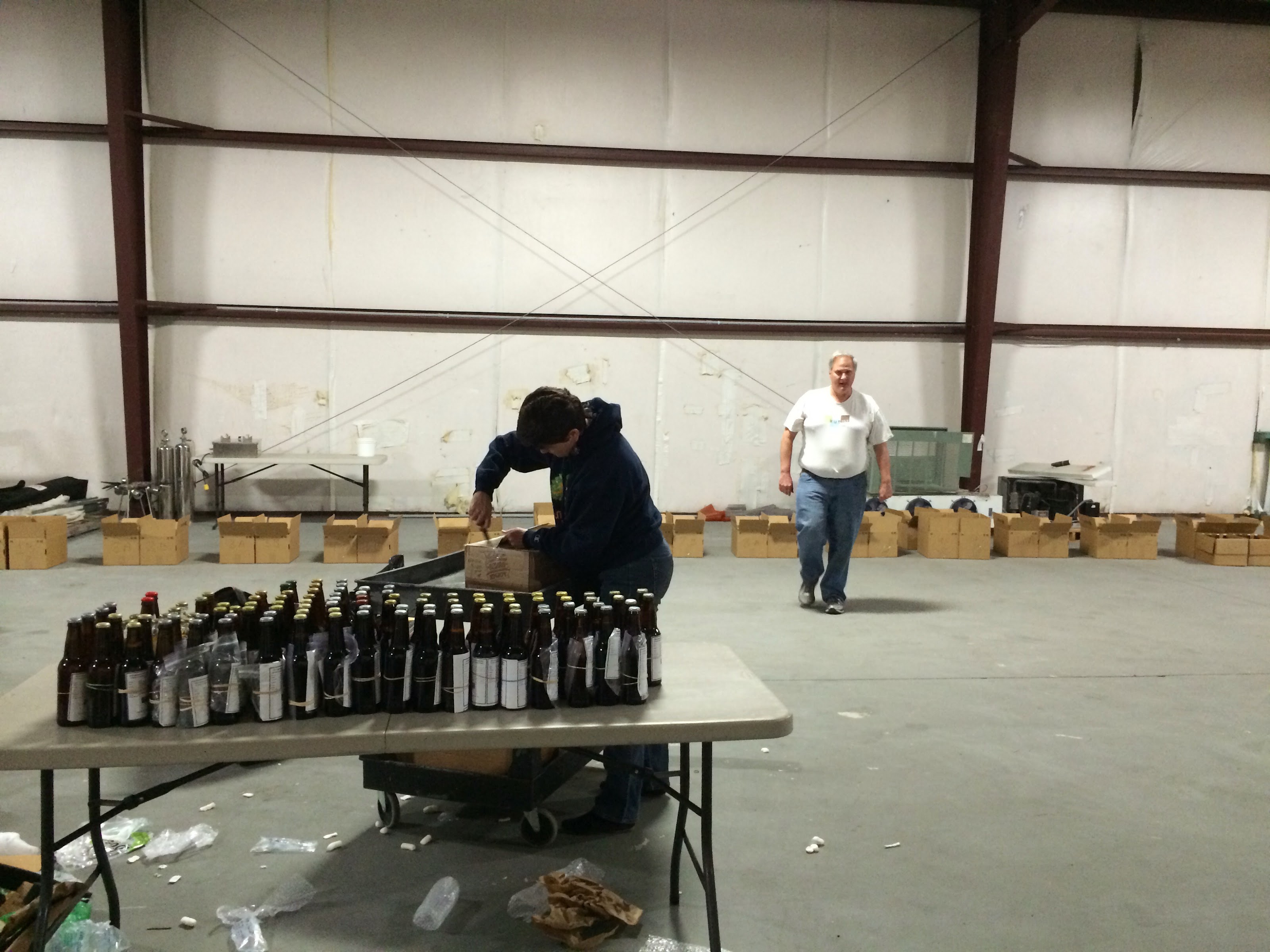 And on it went until nearly 8:00 P.M., making a 12 hour day for Stuart and I and nearly as long for all the rest. The Bluebonnet crew were special troopers, having come from a weekend of merriment and then driving possible THE worst trip in the U.S. - the Dallas to Austin trek - but they hung in there and it's a good thing or the rest of us might still be there now. :-) I will readily admit, I was completely exhausted but I'm confident it was all worth it. Learned a lot as well in case I'm involved in future competition organization. 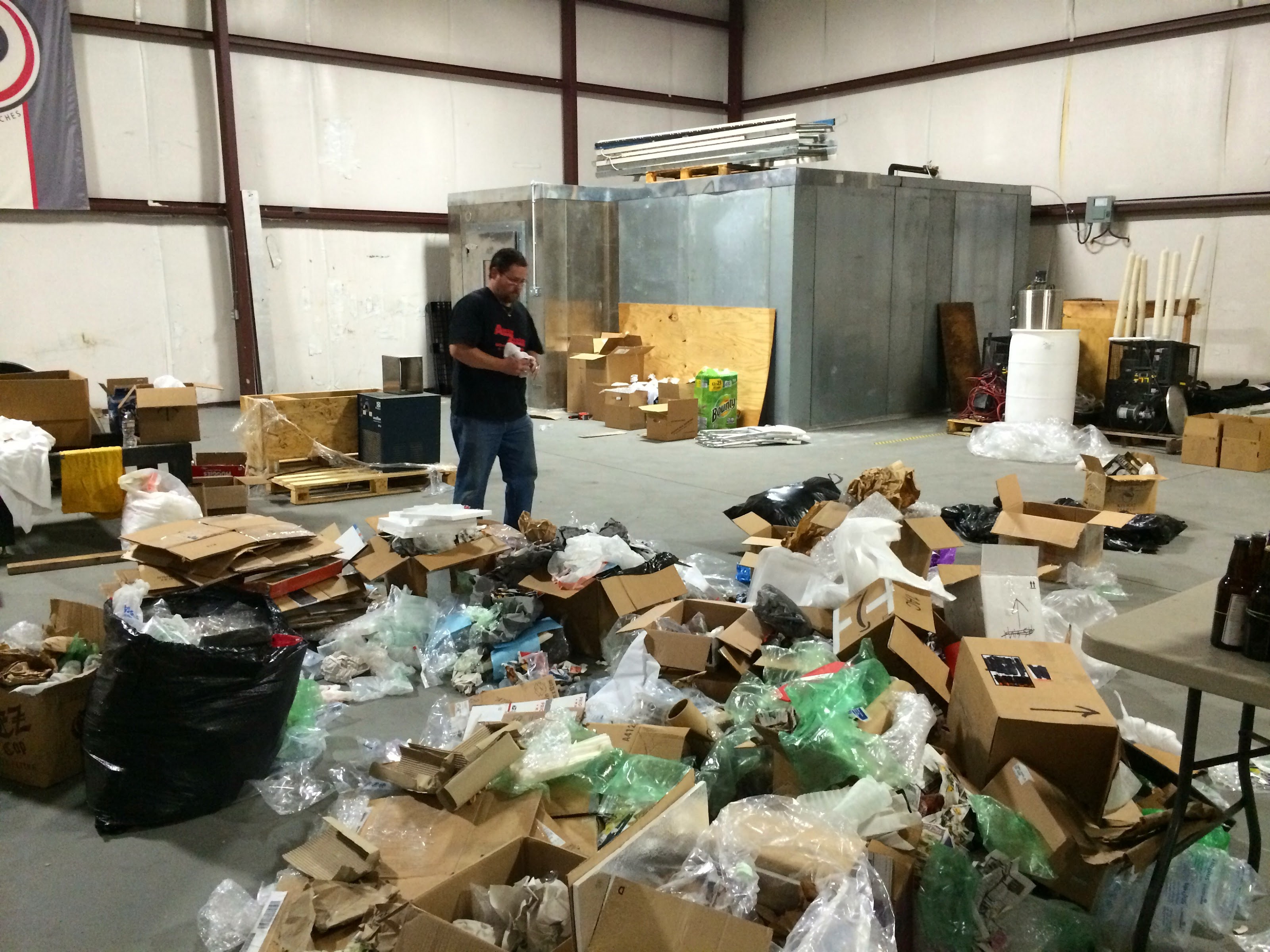 Here's a wee look at some of the aftermath too. Certainly creates a lot of dross, but we are attempting to reuse or recycle as much as possible.

So, entires being sorted, now comes game time. A final (hopefully) appeal for judges and stewards will be issued via email mid-week. I sincerely appreciate each and every judge/steward that can attend this coming weekend. One final note, Janis Gross, the American Homebrewers Association NHC Competition Coordinator will be joining us in Austin for the weekend. Let's make Austin shine.

The Beers Are Rolling In! 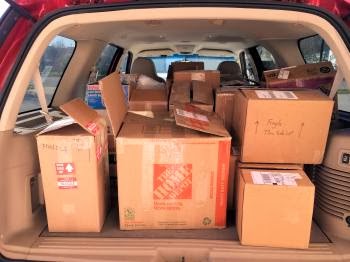 I received a message from Forrest today saying that the entries were piling up at Austin Homebrew Supply. Indeed, they were. Dropped by to pick them up and they pretty much filling all the space in my Expedition. Piles of entries, all shapes and sizes of boxes along with some bottles that were just loose. With the entry deadline of March 17th rapidly approaching, it comes as little surprise there was a 'wave' of entries produced. 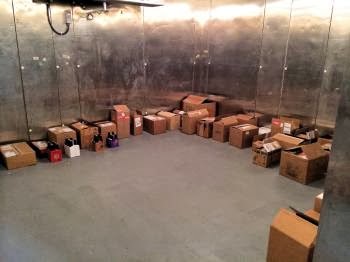 I took all the entries over to the judging center at Rogness Brewing and unloaded them into the cold room. So nice to have this facility. Rest assured, if you have entries that were shipped or dropped off they are happily 'chilling out' at present. I won't be a bit surprised to see another pile up before the end of the week. The weather is disrupting shipments all over the country so any of you that haven't shipped your entries in, I hope they make it in time. Of course, all entries will be checked for Postmark date, not arrival date so rest assured if you shipped it out in time you'll be okay. 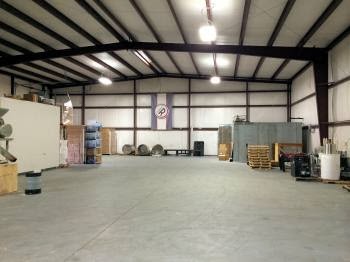 Finally, here's a photo of the judging center next door to Rogness Brewing. It's empty now but I hope it is humming with volunteers for Sorting Day on Sunday, March 23rd. And, even more so with judges and stewards during the judging weekend of Friday through Sunday, March 28th through 30th. If you haven't registered or contacted me and are interested in volunteering for Sorting Day, or being a judge or steward, please review the schedule and information provided for doing so.

Yours Aye!
Neil
Posted by BJCP Austin at 10:39 PM No comments:

It has seemed for weeks now that the 2014 NHC Austin judging was a ways away; not any more! The time is quickly approaching and Stuart and I are quite busy getting everything in order. Oh yes, did I mention? (George) Stuart West is my partner in crime and has been invaluable to this effort. Stuart brings a wealth of knowledge and experience having previous ran the Foam Rangers' Dixie Cup Competition, one of the largest in the U.S.

The supplies from the American Homebrewers Association arrived late last week and are not deposited at the judging site. Like Stuart, Dan Wheeler at Rogness Brewing has been amazing. He got us all set up at Rogness' future expansion space next door where they will be launching their line of ciders in the future. Dan "fired up" the cold room (how's that for an oxymoron?) for us and entries have already began being delivered from the drop-off site at Austin Homebrew Supply. Additionally, Forrest Rogness, owner of both operations has been incredibly supportive of the Austin 1st Round Judging. We couldn't ask for better hosts.

As for the blog, please note that there are now some links above to static pages. Follow the links (in blue) to get all information on the judging schedule and judge/steward registration.

Yours Aye!
Neil
Posted by BJCP Austin at 1:18 AM No comments: